There are no appointment time slots available for this day.

What will we learn and cover in this training

AIR at its core is a wireless bridge and does not interfere with the data transmission signal. It can be produced to operate on any frequency from 2 GHz to 100 GHz. It uses Frequency Division Duplex (FDD) to deliver data traffic in each direction. This means that one frequency is used for downstream (from the base station to end-user) and another frequency for upstream (from the user back to the base station). The system can utilize up to 500 MHz for one sector antenna and multiple antennas with different frequency ranges can be used in the same sector. Flexible frequency allocation, ultrafast broadband speeds, and the ability to offer triple-play services make it the best choice for a fixed wireless last-mile solution. With the evolution of data transmission technology also so-called FDX can be used.

A Docsis based wireless solution.

Docsis is the abbreviation for Data Over Cable Service Interface Specification. This is an international telecommunications standard that enables the delivery of high-bandwidth data over RF in cable television (CATV) systems. Docsis standard has come a long way from its inception to the version 3.1 which is the latest evolution of the standard offering broadband speeds that can compete with fiber networks.

4.0 is already in the development phase providing even higher speeds and the possibility of using FDX.

Docsis transmission technology can be used with AIR to achieve the same characteristics as in a cable network. Docsis equipment consists of CMTS (cable modem termination system) as a data transmission platform and cable modems as end-user devices. Globtel Air system acts as a transport layer (physical infrastructure) and connects CMTS with the end user’s cable modem.

Docsis standard version 3.1 is the latest evolution of the standard offering broadband speeds that can compete with fiber networks.

AIR with Docsis 3.1 can be a very competitive solution in areas with high population density and even in well-developed markets demanding high end-user throughputs. It can provide a broadband speed of more than 46 Gbps per base station sector antenna by using 1 GHz of frequency bandwidth.

Cable operators can easily extend their footprint and seamlessly integrate AIR with Docsis 3.1 in their existing network, OSS/BSS, billing and other systems.  All standard Docsis equipment can be used with AIR and can be purchased from a wide variety of vendors. 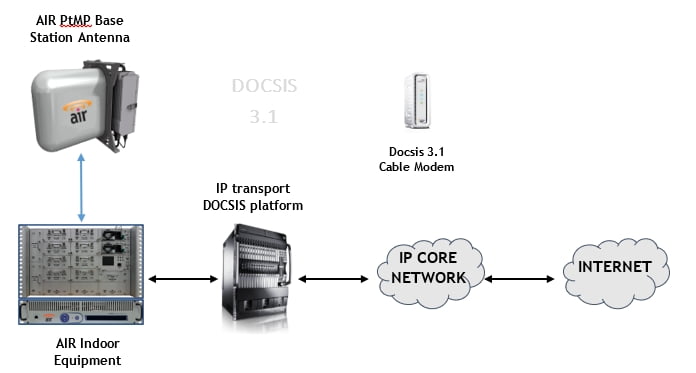 These cookies allow us to count visits and traffic sources so we can measure and improve the performance of our site. They help us to know which pages are the most and least popular and see how visitors move around the site. All information these cookies collect is aggregated and therefore anonymous. If you do not allow these cookies we will not know when you have visited our site, and will not be able to monitor its performance.
Go to Top